Feeding It, Not Eating It

My head was down, sewing like a madwoman, with threads all over and my eyes on the line my machine was supposed to follow. It was actually quite blissful. At the end of a stretch I saw a head bobbing up and down outside of my studio window. There was a beak, bead-like eyes and a skinny, feathered neck.

This bobbing creature fearlessly came to the window and looked in. We met, eye to eye, and she won the stare down. My sewing fell to the side, and I just had to check out this very confident animal.

It looked bigger than a chicken, nothing like a seagull, a different shape than a crow. I don’t know the names of birds, so I snapped a few photographs of this curious buddy and figured someone on Facebook would know. Maybe a pheasant? Maybe a rooster—no it didn’t have that wobbly gobble thing under its chin.

I wanted to yell upstairs to David to check out this cool sighting, but didn’t want to make noise and scare the poor bird. So I did what every person living in 2013 would do… I sent him an IM and a text message: “Check out the fucking huge bird outside my window”. 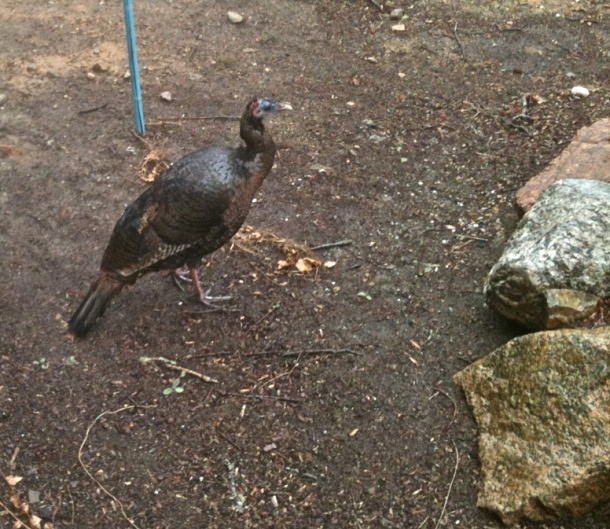 Never saw one of these before.

Big Bird moved from window to window all around the house, stopping to eat nibbles on the ground, and always looking our way to see what we were doing. Bella, our cat, followed inside from window to window; she was quite cautious. Her tail twitched, but no noises were made. This bird was at least three times her size. She knows her place in the universe, but she still had to watch. At times, she’d get overwhelmed and want to be held, with her face pushed in my arm pit (ugh!).

The bird spent most of her time under the bird feeder picking up the leftover goodies. She also ate all of the cranberries I tossed out after Christmas. Quite contented, she ate, and we gawked. David, who is far more quiet than I, slipped out the front door and got two feet away from our feathered friend. He was thinking Jurassic Park…they can’t see me if I don’t move. Snap, Snap,Snap… good pictures!!! Yes!!!!

Over the course of the next twenty minutes, this gorgeous bird, with all shades of rich brown feathers, explored our front yard. She walked on the stone path, across the dirt and checked out all of the transplanted bushes. Basically, she made her self at home. She even made a huge poop on the front walk…a housewarming gift?

After posting the pix on Facebook, there was feedback. My daughters both responded with awe and interest. Molly identified the guest as a wild female turkey. Both kids thought she was a beauty.

Someone else suggested that if I had a rifle, I could have a great meal, a trophy, and a really interesting blog post to write. I responded that I would be feeding this bird, not eating it. The thought of killing this animal and eating it never crossed my mind. Actually, I was quite grossed out by the comment. The suggestion seemed so wrong, so out of place for something so interesting and very much alive in my front yard. Others posted warnings that wild turkeys can be very aggressive, and I ought to be careful. Maybe they’re only aggressive to people who have rifles. 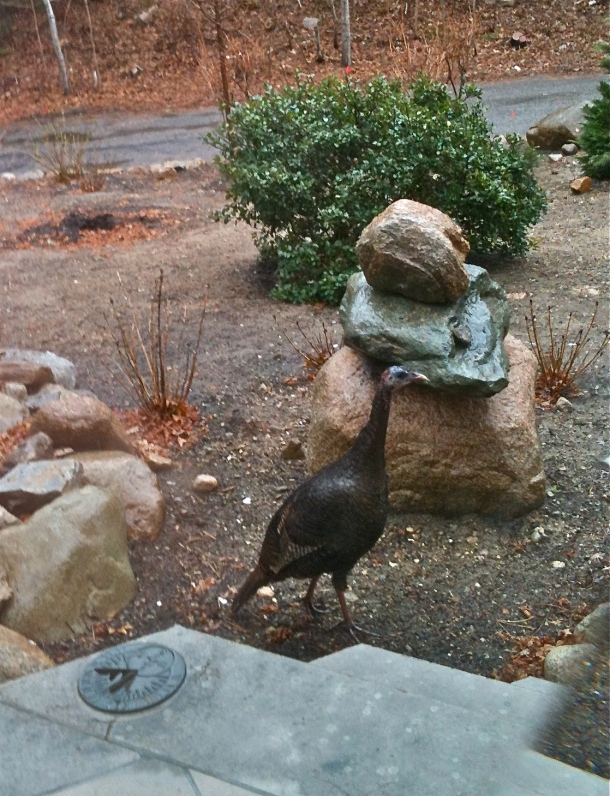 The best news was that my friend Katy suggested that this mama turkey might have babies nearby… a whole new generation of these beauties. I will look in earnest, but disturb nothing. Seeing the mama and the babies would be quite a gift. In the meantime, I’ll toss out birdseed and hope everyone else enjoys her as much as I do, poop and all.

I am a wordsmith, a fiber artist, a yogi, and a high energy, ball of fire. My glass is always half full, and I always have fifteen tasks ongoing simultaneously. Authority figures are not my friends, and I seldom color within the lines. I tend to “nest” in my cocoon-like home.
View all posts by yarnsista »
← Reboot
Post Marathon Thoughts →