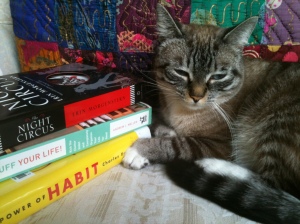 Often I absolutely hate to see a book come to an end. I savor the last fifty pages and sip them like fine wine. This happens more times than not, but this week it was “not”.

I read three books, all of which would have benefited from a haircut, two severe, one just a trim.

The Night Circus by Erin Morgenstern is an engaging flight of fancy. The reader leaves behind roots in reality and yields to the power of imagination. It’s a story about a fantastic circus where nothing is what it seems. Is the illusionist doing clever slight of hand tricks or are other forces at work? Yes, there’s a love story, but that isn’t the prime mover for me. The tension between what is possible versus the bizarre energizes the novel for me. Is it all a dream or would that be too simple? So many people told me they either hated the book or loved it. I liked most of it, with the exception of three or four chapters that seemed unnecessary and non-productive. The ending is not as interesting as I would have hoped, but the author succeeds in making me let go of rational expectations and that is an experience worth having.

It’s true that I tend to favor fiction over non-fiction, but two pieces of non-fiction made it to the top of my reading pile this week. Unstuff Your Life by Andrew J. Mellen caught my attention because of its focus on simplicity and minimalism. It is just shy of 400 pages and could well have afforded to unstuff itself. This is one of those books that would have made a superb two to three page magazine article. There are basically three messages:

1.     You are not your stuff. Separate yourself from your things and make rational decisions about them.

2.     One home for everything. That means everything has its place; put it there.

I didn’t learn anything new from this book and should have known better to buy yet another book about decluttering my life.  Lesson learned; I’m donating the book. It will be out of the house tomorrow.

The second non-fiction book I tackled this week is The Power of Habit by Charles Duhigg. The subtitle interested me: Why We Do What We Do in Life and Business. Duhigg explores how habits are formed and looks at the science, business and behavioral aspects of the subject. Examples are drawn from the research labs of MIT as well as case studies from around the country. He lets the reader see how cravings are turned into habits. This book bounces from neurological studies to animal research to case studies focusing on anecdotal stories then ricochets to management’s study of customer habits and back again. There is the constant reiteration of The Habit Loop which shows that habits consists of a cue that prompts a response, a routine that satisfies the prompt, and finally, a reward. The bottom line in converting bad habits to good ones calls for leaving the cue and the reward in place, while swapping out the routine to a healthier one. Duhigg shows that it is possible to create new habits and that even unsuspecting victims of memory loss can succeed at this task. Maybe there is hope for me.

I confess, I was fascinated by the analysis of how businesses collect customer habit information and use it to increase sales. I felt like a voyeur looking into the creation of Febreze—a product that was almost doomed for failure because customers were not making this product a habit. People who had smelly houses, didn’t recognized the smell after a while, and never felt the need to “refresh it” or get rid of the odor. The folks who did buy it saw it as a finishing touch to a room that was just tidied. I was likewise curious about how Alcoa revamped its entire company by making Workplace Safety its top priority. It retrained all levels of its operation to strive for no workplace injuries. Basically, new habits had to be formed from top to bottom. The process was eye-opening and yet another example of “doing well by doing good”.

The Power of Habit is a worthwhile read, but needs some serious skimming through the repetition and prolonged case studies. It is interesting to learn how business endeavors to get inside the consumer’s head (literally) in order to push for more sales, more business, more buying. The marketing research team at Target found a way to identify pregnant women at the very earliest stages of pregnancy in order to capture the $6800 of potential sales during the first year of a new born’s life. Big brother is alive and well—I should have already known that.

I am a wordsmith, a fiber artist, a yogi, and a high energy, ball of fire. My glass is always half full, and I always have fifteen tasks ongoing simultaneously. Authority figures are not my friends, and I seldom color within the lines. I tend to “nest” in my cocoon-like home.
View all posts by yarnsista »
← Know That Kid ASAP
Rock, Not Stoned →